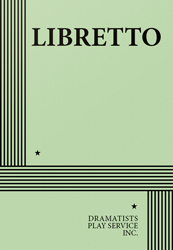 Musical, Drama
6 men, 4 women
Total Cast: 10, Flexible Set
ISBN-13: 9780822214076
Apply for Rights
FEE: Quoted upon application. Cast Recording: $20.00. INSTRUMENTATION: Piano/Conductor, Violin, Percussion, Cello, Horn, Reed, Keyboard 2.
THE STORY: Ten nameless characters pair up in ten different scenes of sexual pleasure and/or despair. One character from each scene moves on to the next, seemingly dumping his old partner in favor of new prey. The play begins in 1900 with a Prostitute soliciting an unwilling Soldier. The next scene takes place in the 1940s, and the Soldier, afraid of dying in the war, tussles with a sympathetic Nurse. Next, the Nurse becomes a 1960s dominatrix over her patient, an upper-crust College Boy with wild leanings. In the 1930s, the College Boy reappears as the impotent partner of an adulterous Young Wife who can only have relations with him in seedy, out-of-the-way places. Meeting the woman’s Husband in the next scene, we see why she’s been driven to such moral turpitude. In her loneliness, the Wife dances a haunting pas-de-deux with the mirror image of her repressed, sensual self. Experiencing the Wife’s scene from a totally different perspective, we then meet the Husband as a closet homosexual (and on the Titanic, no less), using the ship’s imminent demise to steal a tango with a gorgeous boy hustler called the Young Thing. Shifting to a 1970s disco, a bisexual Writer lures the Young Thing home only to feel the creeping certainty of a morning-after desertion. Finally, the circle of lovers closes where it all began. A Senator quits his relationship with an Actress because of political liabilities, then seeks the Prostitute from the first scene, whom he desperately wishes he could love. A tableau begins forming in the background, with all the couples singing “Hello Again” over and over in a moody recognition of love’s inescapable pull.
The joys of sex are here for the asking in this adult musical fantasy suggested by Arthur Schnitzler’s La Ronde. As though seen through the lens of a combination time machine and bawdy, old-time kinescope, HELLO AGAIN crisscrosses beds and jumps from decade to decade, intimately examining the painful secrets that drive characters into each other’s arms and towards the bruising effects of reckless passion. With a score that saturates the mind, HELLO AGAIN has an unforgettable, dreamlike quality—and all the luxuriance of an insistent seduction. “Mr. LaChiusa’s smart, beguilingly world-weary work was the best original musical of the season…” —NY Times. “LaChiusa is an artist with a puckish, damn-the-torpedoes imagination…his deliriously eclectic score is like tuning into a radio station with a serious President Clinton complex: It wants to please as many listeners as possible. For the camp mavens, there is a devastating pastiche, from “shlag"-heavy Viennese operetta to Yiddish boogie-woogie. For the Sondheim freaks, some devious wordplay. For the 'they don’t write them like they used to’ crowd, a plangent and hummable ballad…HELLO AGAIN scores.” —NY Newsday.
Apply for Rights
Apply for Rights
Perusal Score
Complete Set of Scores
Cast Recording