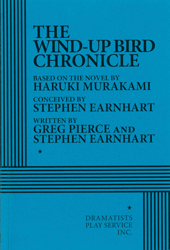 Full Length, Drama
8 men, 6 women (doubling, flexible casting)
Total Cast: 14, Flexible Set
ISBN-13: 9780822238119
Apply for Rights
FEE: $100 per performance.
THE STORY: At once a detective story, an account of a disintegrating marriage, and an excavation of buried secrets from World War II, this surreal mystery follows an unassuming “everyman,” Toru, as he searches for his wife who’s inexplicably disappeared. Toru soon encounters a cast of strange characters, each with their own intriguing stories, who begin showing up in his dreams, opening doors to a hallucinatory world charged with sexuality and violence. As the lines between dreams and reality dissolve, Toru must confront the dark forces that exist inside him as part of his human nature.
“Odd, mad, surreal…[with] beauty and emotional honesty beneath its weirdness.” —Times (London). “Wondrous…and poignantly memorable in all sorts of unexpected ways.” —Economist (London). “Does a tremendous job of creating a genuinely theatrical experience from a complex work of literature…has the heightened intensity of something by David Lynch.” —Variety.
Apply for Rights