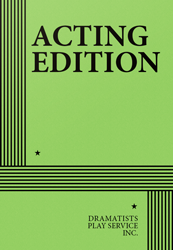 MIN. PERFORMANCE FEE: $105 per performance. SPECIAL NOTE: The original music composed by Gina Leishman for this play is available through the Play Service for $15.00, plus shipping and handling. To include this music in your production, you must complete the Optional Production Materials Rights Application. The nonprofessional fee for the use of this sheet music is $15.00 per performance.

THE STORY: In Molière’s outrageous satire of medicine and its practitioners, the wealthy Argan, to put it mildly, enjoys poor health. Laxatives, suppositories, bloodlettings, and second and third opinions from the leading quacks are the order of his day—and hell on his wily, back-talking servant Toinette. His daughter Angélique is in love with the impoverished Cléante, but Argan wants to marry her to Thomas Diafoirus, a medical dunce who can assure his father-in-law a lifetime of health care. Cléante disguises himself as a music teacher to gain access to his love, but Béline, Argan’s mercenary second wife, threatens to expose them. A disguised Toinette, sage advice from his brother Béralde, and a faked death scene finally teach Argan where to place his trust. The play ends with Argan’s ceremonious, pig–Latin induction into the medical profession.
“Translator Magruder is [known] for his brash injections of present-day lingo into seldom-seen French comedies that had been deemed 'stuffy’ before he got his ink-stained hand on 'em. Anything goes, anything for a laugh, any port in a storm, even if (especially if) that port happens to be an outhouse. It’s a rude, bright, wild show.” —New Haven Advocate. “Magruder has emphasized the play’s origin as a 'comédie-ballet’ in three acts, 'with two musical interludes and a grand finale.' The last introduces Hillary Clinton in a health-care mode, one of the many liberties he has taken in his unstinting efforts to make this INVALID fabulous and contemporary.” —Hartford Courant.
Apply for Rights
Click here for ePlay
Sheet Music