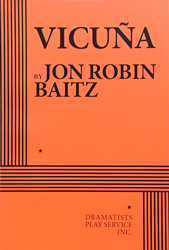 Apply for Rights
FEE: $105 per performance.
THE STORY: A tailor to the wealthy, powerful, and famous struggles to serve a very unusual client: a blustering real-estate tycoon and reality-TV star who—to everyone’s surprise—becomes a major party’s nominee for president. As the election spins out of control, the tailor and his apprentice are forced to examine their roles as confidants and image-makers for the candidate…and whether the right suit has the power to clinch the presidency.
“…there are plenty of laughs…[Baitz] writes incisive and colorful dialogue peppered with passages of political acuity…” —The Hollywood Reporter. “[VICUÑA is] an honest to goodness comedy…elaborately worked out (in the old-fashioned Broadway way of S.N. Behrman and George S. Kaufman)…with just enough wit and wisdom…In Baitz’s hands, comedy and menace work together…” —Los Angeles Times.“ …withering political satire…a uniquely fresh theater experience…” —Variety.
Apply for Rights
Click here for ePlay