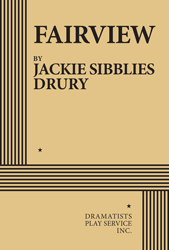 THE STORY: At the Frasier household, preparations for Grandma’s birthday party are underway. Beverly is holding on to her sanity by a thread to make sure this party is perfect, but her sister can’t be bothered to help, her husband doesn’t seem to listen, her brother is MIA, her daughter is a teenager, and maybe nothing is what it seems in the first place…! FAIRVIEW is a searing examination of families, drama, family dramas, and the insidiousness of white supremacy.
Winner of the 2019 Pulitzer Prize. “…dazzling and ruthless…one of the most exquisitely and systematically arranged ambushes of an unsuspecting audience in years…FAIRVIEW is a series of perspective-altering surprises, and they keep coming at you even when you think [Drury] must surely have emptied [her] bag of tricks…a glorious, scary reminder of the unmatched power of live theater to rattle, roil and shake us wide awake.” —The New York Times. “…[an] outstanding, frustrating, hilarious, and sui generis play…From moment to moment, Drury disturbed and frustrated and entertained us and made us wonder what we were all doing in that room, watching black actors perform being human.” —New Yorker. “…[a] vehement, searching, fourth-wall-demolishing [play]…under a playful surface, [FAIRVIEW] is strenuous and scalpel-sharp and working its way through deep rage…[it’s] rare and intimidating, unresolved and raw. It left me with the blood pounding in my ears…” —New York Magazine.
Apply for Rights
Click here for ePlay