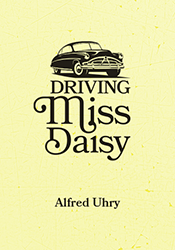 MIN. PERFORMANCE FEE: $130 per performance. SPECIAL NOTE: Original music composed by Robert Waldman for the New York production of this play is available through the Play Service. The cost is $30.00, and the music will be distributed digitally. To include this music in your production, you must complete the Optional Production Materials Rights Application. The nonprofessional fee for the use of this music is $15.00 per performance.

THE STORY: The place is the Deep South, the time 1948, just prior to the civil rights movement. Having recently demolished another car, Daisy Werthan, a rich, sharp-tongued Jewish widow of seventy-two, is informed by her son, Boolie, that henceforth she must rely on the services of a chauffeur. The person he hires for the job is a thoughtful, unemployed black man, Hoke, whom Miss Daisy immediately regards with disdain and who, in turn, is not impressed with his employer’s patronizing tone and, he believes, her latent prejudice. But, in a series of absorbing scenes spanning twenty-five years, the two, despite their mutual differences, grow ever closer to, and more dependent on, each other, until, eventually, they become almost a couple. Slowly and steadily the dignified, good-natured Hoke breaks down the stern defenses of the ornery old lady, as she teaches him to read and write and, in a gesture of good will and shared concern, invites him to join her at a banquet in honor of Martin Luther King, Jr. As the play ends Hoke has a final visit with Miss Daisy, now ninety-seven and confined to a nursing home, and while it is evident that a vestige of her fierce independence and sense of position still remain, it is also movingly clear that they have both come to realize they have more in common than they ever believed possible—and that times and circumstances would ever allow them to publicly admit.
Winner of the 1988 Pulitzer Prize and the Outer Critics Circle Award for Best Off-Broadway Play. A warm-hearted, humorous and affecting study of the unlikely relationship between an aging, crotchety white Southern lady, and a proud, soft-spoken black man. A long-run Off-Broadway success and an Academy Award-winning film. “The play is sweet without being mawkish, ameliorative, without being sanctimonious.” —NY Times. “…a perfectly poised and shaped miniature on the odd-couple theme.” —NY Post. “Playwrights Horizons has a winner in this one…gives off a warm glow of humane affirmation.” —Variety. “DRIVING MISS DAISY is a total delight.” —NY Daily News.
Apply for Rights
Click here for ePlay
Incidental Music