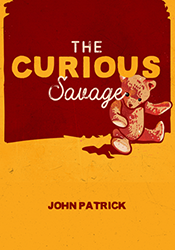 Apply for Rights
FEE: $130 per performance.
THE STORY: Mrs. Savage has been left ten million dollars by her husband and wants to make the best use of it, in spite of her grown-up stepchildren’s efforts to get their hands on it. Knowing that the widow’s wealth is now in negotiable securities, and seeing they cannot get hold of the fortune, the stepchildren commit her to a sanatorium hoping to “bring her to her senses.” In the sanatorium Mrs. Savage meets various social misfits, men and women who just cannot adjust themselves to life, people who need the help Mrs. Savage can provide. In getting to know them, she realizes that she will find happiness with them and plans to spend the rest of her life as one of them. But when the doctor tells her there is no reason why she should remain, she hesitates to go out into a hard world where people seem ready to do anything for money. The self-seeking stepchildren are driven to distraction by their vain efforts to browbeat Mrs. Savage, but she preserves her equanimity and leads them on a merry chase. At last her friends conspire to get rid of her stepchildren, and through their simple belief in the justice of her cause, they enable Mrs. Savage to carry out her plans to establish a fund to help others realize their hopes and dreams. The dominant mood is high comedy, and the audience is left with a feeling that the neglected virtues of kindness and affection have not been entirely lost in a world that seems at times motivated only by greed and dishonesty.
An entertaining and fanciful comedy, and one of our most successful plays for all groups.
Apply for Rights
Click here for ePlay