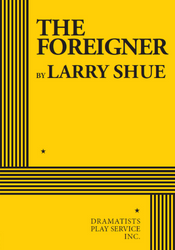 THE STORY: The scene is a fishing lodge in rural Georgia often visited by “Froggy” LeSueur, a British demolition expert who occasionally runs training sessions at a nearby army base. This time “Froggy” has brought along a friend, a pathologically shy young man named Charlie who is overcome with fear at the thought of making conversation with strangers. So “Froggy,” before departing, tells all assembled that Charlie is from an exotic foreign country and speaks no English. Once alone the fun really begins, as Charlie overhears more than he should—the evil plans of a sinister, two-faced minister and his redneck associate; the fact that the minister’s pretty fiancée is pregnant; and many other damaging revelations made with the thought that Charlie doesn’t understand a word being said. That he does fuels the nonstop hilarity of the play and sets up the wildly funny climax in which things go uproariously awry for the “bad guys,” and the “good guys” emerge triumphant.
Winner of two Obie Awards and two Outer Critics Circle Awards as Best New American Play and Best Off-Broadway Production. An inspired comic romp, equal in inventive hilarity to the author’s classic comedy The Nerd, the present play enjoyed a sold-out premiere in Milwaukee before moving on to a long run Off-Broadway. Based on what the NY Post describes as a “devilishly clever idea,” the play demonstrates what can happen when a group of devious characters must deal with a stranger who (they think) knows no English. “Something funny is going on in Milwaukee—to the delight of audiences at the Milwaukee Repertory Theater.” —Variety. “I laughed start to finish at one comic surprise after another.” —The New Yorker. “…a constant invitation to relax and laugh at the foolishness of life…” —Village Voice. “Shue’s comedy is positively antic, yet pleasantly seasoned with a few dashes of sentimentality…He has raided comedy’s storehouse…” —Bergen Record.
Apply for Rights