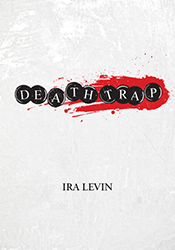 THE STORY: Comfortably ensconced in his charming Connecticut home, Sidney Bruhl, a successful writer of Broadway thrillers, is struggling to overcome a dry spell which has resulted in a string of failures and a shortage of funds. A possible break in his fortunes occurs when he receives a script from a student in the seminar he has been conducting at a nearby college—a thriller that Sidney recognizes immediately as a potential Broadway smash. Sidney’s plan, devised with his wife’s help, is to offer collaboration to the student for co-credit. Or is it? DEATHTRAP provides twists and turns of devilish cleverness, and offers hilariously sudden shocks in such abundance that audiences will be spellbound until the very last moment.
“It is a classic thriller, a genre with a style, a manner and an audience of its own.” —NY Post. “The intricately fashioned plot contortions brought gasps, the comedy lines drew delighted chortles…” —Hollywood Reporter. “Two-thirds a thriller and one-third a devilishly clever comedy… Suspend your disbelief and be delighted. Scream a little. It’s good for you.” —Cue Magazine. “If you care to assassinate yourself with laughter, try DEATHTRAP.” —TIME Magazine.
Apply for Rights