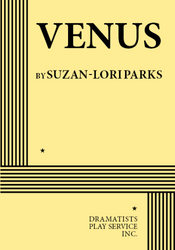 THE STORY: In 1810, The Venus Hottentot (as she is dubbed)—a young black woman with an enormous posterior—is lured away from her menial job in South Africa to tour the world and make lots of money. Once in England, however, she is sold to a freak show and becomes a star. She shows off her attribute, bringing in crowds and raking in money for the side show owners. Quickly becoming adept at displaying herself and understanding what the people want from her as a freak, she even tries to break out on her own, but can’t quite master that in those social times. Eventually, she is procured by a white doctor who is more than fascinated with her. He falls in love with her and keeps her as his mistress until he is in danger of losing his medical reputation and social standing. Venus, who journeyed to Europe with high hopes, at the end of her short life, was dissected by the man she loved.
“VENUS is a formidable experience: a gnarly but brilliant meditation on the ambiguity of race, history, the colonized imagination, sexuality, and theatrical storytelling itself.” —The New Yorker. “The true story of a 19th-century Hottentot woman shipped from Africa to England and displayed as a freak was turned into a chilly but gripping play by Suzan-Lori Parks.” —Time Magazine. “Suzan-Lori Parks is…one of the most important dramatists America has ever produced. VENUS addresses a number of subjects, including race, gender, science, love, slavery, colonialism, art, pleasure and death. It tells a tragic story discursively, digressively, elliptically, mockingly, shockingly, heartbreakingly.” —Civilization Magazine.
Apply for Rights