Fifth Planet and Other Plays 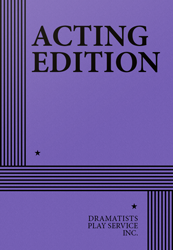 THE STORIES: FIFTH PLANET. Charts the friendship between two observatory workers as it waxes and wanes over the course of a year. (1 man, 1 woman.) ARE YOU READY. The fates of three people drawn to the same restaurant are altered in an instant. (2 men, 1 woman.) DAMAGE CONTROL. Examines a politician and his aide during a moment of crisis. (2 men.) MISS YOU. Two couples rearrange via call-waiting. (1 man, 1 woman.) THREE MONOLOGUES. Depicts a young woman’s solitude. (1 woman.) WHAT DO YOU BELIEVE ABOUT THE FUTURE? Ten people answer the title question. (10 men/women). WE HAD A VERY GOOD TIME. Follows a married couple on a journey to a menacing foreign country. (1 man, 1 woman.)
Apply for Rights