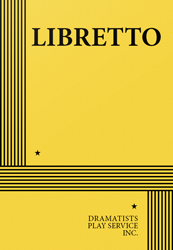 Musical, Comedy/Drama
4 men, 3 women, 1 girl (doubling)
Total Cast: 8, Flexible Set
ISBN-13: 9780822219736
Apply for Rights
FEE: Quoted upon application. INSTRUMENTATION: Keyboard/Conductor, Keyboard 2, Bass, Guitar, Percussion, Reed.
THE STORY: “I never really knew what I was like until I quit smoking, by which time there was hell to pay.” So observes Charlotte, a young writer of short stories as she confronts her past, present and future in post 9/11 Manhattan. With the help of her well-intentioned friends, Marco and Kathy, Charlotte embarks on a modern-day odyssey as she desperately attempts to fill her nicotine-starved days with swimming at the Y and jogging, but to no avail. She’s a stranger in her own body, and it’s not a pretty thing. Flashbacks to earlier years when she first arrived in New York bump up uncomfortably with her present. She’s confronted by eccentric demons of her past: her ex-lover Robert (who pops up to criticize her at the most inopportune moments); the quintessential New York roommate-from-hell, Cinder; and a former employer, Mr. Bunder, a proponent of the five-martini lunch. Charlotte is also haunted in her dreams by her adolescent heroine, Anne Frank, who warns her of the danger of flotsam—the accumulation of psychic and emotional debris that interrupts the flow of one’s life. Unable to act on impulse and unable to connect with her friends, Charlotte begins to atrophy, until finally, the dam breaks. She discovers to her horror, and ultimate relief, that she has always been running away from herself; not only does she have to kick her smoking habit, she has to overcome her addiction to fleeing. Once she begins clearing away the flotsam, Charlotte is able to be a better friend, a better writer and (yes, there is such a thing) a better New Yorker. As opposed to swimming against the tide, alone and without direction, Charlotte realizes that sometimes, like little fish, it’s smarter and safer to swim with the school.
“A stylish new musical. LITTLE FISH translates the sort of neurotic, sidewise narrative associated with The New Yorker’s fiction into the terms of musical comedy. A lively musical about what it means to feel lifeless in contemporary Manhattan. Mr. LaChiusa’s score proceeds to blend the jazzy, noirish feel of what is conventionally called the symphony of the city. LITTLE FISH can be regarded as a direct, latter-day answer to (Sondheim’s) Company.” —NY Times. “There is so much wonderful writing in the ninety minutes of LaChiusa’s LITTLE FISH—the lyrics are wittily pointed and elegantly formed; the music inventively bends standard melodic patterns into unexpected shapes; LaChiusa is sharp with observation, generous with compassion, and able to evoke volumes of experience in the flick of a single phrase.” —Village Voice.
Apply for Rights
Apply for Rights
Perusal Score
Complete Set of Scores
Cast Recording