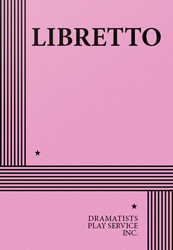 Musical, Comedy
4 men, 5 women (doubling)
Total Cast: 9, Flexible Set
ISBN-13: 9780822221135
Apply for Rights
FEE: Quoted upon application. INSTRUMENTATION: Piano/Conductor, Vocal, Reed, Percussion.
THE STORY: It is the end of the Cretaceous period. A giant meteor collides with the earth and wreaks havoc with the ecosystem. In order to avoid extinction, the Dinosaurs sign a peace pact called the Treaty of Meat. For a time there is peace between the Carnivores and the Herbivores. But when the wise King of the Tyrannosauruses suddenly dies and his none-too-clever thirteen-year-old son, Quincy, rises to power, trouble begins. King Quincy leads the Tyrannosauruses on a terrible rampage. Carlotta Devries, a Parasaurolophus singing star, and her thirteen-year-old daughter, Mindy, narrowly escape Quincy’s forces and take refuge at Swifty’s Volcano Café, the clandestine headquarters for the Dinosaur resistance. The café is run by Swifty Levine, a Triceratops comedian, and is staffed with a variety of zany, peaceable Dinosaurs. Can the power of goodwill win out over the forces of evil? It’s a family show…so yes. THE DINOSAUR MUSICAL is a madcap, jazzy prehistoric musical comedy combining the intrigue and romance of a Hollywood World War II epic with a perky adolescent parent trap. Throw in some Borsht Belt comedy, an erupting volcano and the invention of spaghetti and you’ve got something for everyone of any age.
“A winning and delightful family show.” —Philadelphia Inquirer. “THE DINOSAUR MUSICAL is a rare treat—a family musical that really can entertain the whole family. It’s a show written with young children in mind that does not talk down to its audience. It works on several levels—it’s a cute story about dinosaurs for youngsters; a 'girl power’ story to appeal to teenagers; and a musical comedy with lots of wit to appeal to adults.” —Talkin’ Broadway. “A charming, irreverent and highly amusing romp. This show is a trippy little musical comedy, full of visual gags, witty word play and some nice tunes. And it’s not like anything else you’ve seen.” —Kansas City Star.
Apply for Rights
Perusal Score
Complete Set of Scores