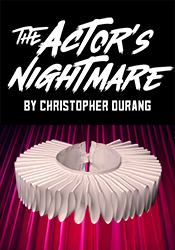 THE STORY: Having casually wandered onstage, George is informed that one of the actors, Eddie, has been in an auto accident and he must replace him immediately. Apparently no one is sure of what play is being performed but George (costumed as Hamlet) seems to find himself in the middle of a scene from Private Lives, surrounded by such luminaries as Sarah Siddons, Dame Ellen Terry and Henry Irving. As he fumbles through one missed cue after another the other actors shift to Hamlet, then a play by Samuel Beckett, and then a climactic scene from what might well be A Man for All Seasons—by which time the disconcerted George has lost all sense of contact with his fellow performers. Yet, in the closing moments of the play, he rises to the occasion and finally says the right lines, whereupon make-believe suddenly gives way to reality as the executioner’s axe (meant for Sir Thomas Moore) instead sends poor George to oblivion—denying him a well-earned curtain call.
Conceived as a companion piece to the author’s award-winning short play Sister Mary Ignatius Explains it all for You (and providing for doubling by the same actors), this hilarious spoof details the plight of a stranger who is suddenly pushed on stage to replace an ailing actor.
Apply for Rights