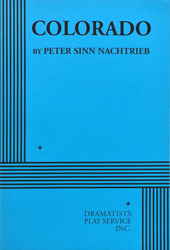 THE STORY: “I want to use this crown to change the world! If I can just change one life, one little insignificant life, I think it will justify the beauty that God has given me.” So ends the victory speech of seventeen-year-old Tracey Ackhart upon her coronation as Miss Late Teen Colorado. Alas, a day before the national pageant in Virginia Beach, Tracey disappears, hurling the rest of her family, whose lives until then had revolved around her, into disarray. Grace and Ron, Tracey’s mismatched parents, differ in the way they cope. Travis, Tracey’s awkward, sexually awakening younger brother, is unsure how to feel about a sister who ruthlessly tormented him. The ties of family begin to fray, flashbacks uncover mystery, and startling discoveries and revelations hurtle the entire family towards an emotional abyss. Darker memories emerge, nervous breakdowns erupt, the cause of Tracey’s disappearance is uncovered. COLORADO is a sharp, dark comedy tinged with tragedy and sadness. It’s a play about disappointment American-style, the dreams of a family, and the traps set to keep those dreams far, far away.
“Funny, sassy and often penetrating…Nachtrieb has a keen eye for the ridiculous excesses in American culture and a finely tuned ear for comically contorted or flatly self-absorbed locutions.” —San Francisco Chronicle. “Those with a global view and an NPR membership would say Peter Sinn Nachtrieb has his finger on the pulse of the suburban zeitgeist. Since it’s just us, though, let’s say Nachtrieb knows what’s under the stadium blanket in the Volvo, and behind the plantation shutters.” —Contra Costa Times. “…big laughs, twisted subject matter and a provocative surprise or two. Nachtrieb is a skillful writer, and the new play delivers.” —Oakland Tribune. “Nachtrieb weaves a deliciously sinful web that capitalizes on a family in serious turmoil. With all its sharp dialogue, twisted characters, and deranged plot points, it even has a poignant ending that draws sympathy and maybe a few tears from its audiences.” —Daily Californian.
Apply for Rights
Click here for ePlay