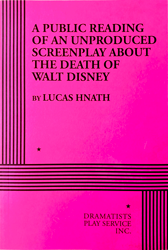 Apply for Rights
FEE: $105 per performance.
THE STORY: Tonight, Walt is going to read you a screenplay he wrote. It’s about his last days on earth. It’s about a city he’s going to build that’s going to change the world. And it’s about his brother. It’s about everyone who loves him so much, and it’s about how sad they’re going to be when he’s gone. Right? I mean, how can they live without him? How can anyone live without him?
“…a blackly comic inversion of the public Disney persona, in the form of a stylized screenplay being read in an anonymous-looking corporate conference room…Walt would be doing cartoonish gyrations in his grave if he were to see how thoroughly Mr. Hnath (pronounced nayth) has subverted the popular image of Disney.” —NY Times. “Minutes into the darkly humorous play it’s clear that for the famous man who made Mickey Mouse, movies and the Magic Kingdom, everything was about him. Always. Especially during his last days on earth."—NY Daily News. “…a devastating portrait of a man for whom make-believe was more real than reality itself.” —NY Post. “A blood-pumping and often hilarious evening of theater.” —TheaterMania.com. “Enjoyably weird and hermetic…Nothing that ever came out of the Magic Kingdom was ever this animated.” —Time Out NY.
Apply for Rights
Click here for ePlay