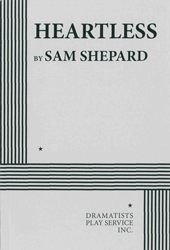 THE STORY: Sally lives with her mysterious family in a cavernous home overlooking Los Angeles. When a visitor arrives, Sally’s dark secrets—and the secrets of those around her—threaten to come to light.
“This is not a play for people who need answers more than questions…we feel the playwright moving into gripping new territory. Just as the professor wants to go somewhere without a name, Shepard, bless him, keeps us searching.” —Newsday. “These characters fit into Shepard’s pantheon of damaged, dysfunctional people linked by blood and desperation, but there is something particularly bleak and detached about their circumstances…What HEARTLESS reinforces is that we’re all lost, in various stages of decay and disrepair. Characteristically, Shepard finds the dark humor in this quandary.” —USA Today. “The heart has always been a vital organ in the plays of Sam Shepard, and never more so than in HEARTLESS, a poetic, enigmatic and often humorous exploration of the human failure to connect with one another that is the playwright’s most inspired and imaginative work in years…HEARTLESS defies any easy classification or even definition of subject matter…Shepard’s poetic sense of the absurdities of human congress is pitch perfect and the drama never flags.” —The Huffington Post. “Featuring a contentious family, torrid love, mysterious secrets, imposing guilt, a lust for the frontier of the open road, and a staunch refusal to moor itself to a realist grounding, all dripping with darkly comic lyric poetry, HEARTLESS features all that intrigues and mystifies us about Shepard’s work. It is an American master doing what he does best.” —Stage Magazine. “While it declines, firmly but politely, to make certain kinds of literal sense, [HEARTLESS] follows a single, straightforward action through a beginning, middle, and end. The action just happens not to be based in the simple reality we think we perceive on the surface. Shepard has never particularly cared for that surface reality. He is a modernist—these days with a lot of postmodern sauce to his meal—who has found inspiration in painting and poetry as often as in the theater…The wonder and charm of HEARTLESS don’t come from its tric
Apply for Rights
Click here for ePlay