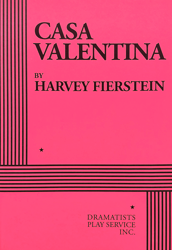 Apply for Rights
FEE: $100 per performance.
THE STORY: Nestled in the Catskills—1962’s land of dirty dancing and Borscht Belt comedy—an inconspicuous bungalow colony catered to a very special clientele: heterosexual men who delighted in dressing and acting as women. These white-collar professionals would discreetly escape their families to spend their weekends safely inhabiting their chosen female alter-egos. But given the opportunity to share their secret lives with the world, the members of this sorority had to decide whether the freedom gained by openness was worth the risk of personal ruin. Based on real events and infused with Fierstein’s trademark wit, this moving, insightful, and delightfully entertaining work offers a glimpse into the lives of a group of “self-made women” as they search for acceptance and happiness in their very own Garden of Eden.
“[CASA VALENTINA] conveys the blessed consummation that occurs for ordinary people when they’re transformed externally into what they think they are inside. As a Tony-winning chronicler of the lives of drag performers…Mr. Fierstein has dealt with similar material before. But the central characters in those earlier works were gay. The men who populate CASA VALENTINA…are emphatically heterosexual. Or so they say, and mostly you have no reason to doubt them…CASA VALENTINA poses some genuinely arresting questions about identity.” —NY Times. “Yes, Fierstein fans, there are plenty of belly laughs as the two acts unfold…But the playwright has much more on his mind and up his chiffon sleeve…[He] gets around with unflinching concern to intolerance, blackmail and the cruelty of the divided psyche. While at it, he demonstrates his awareness of the destructive potential of compulsive behavior…an amazing accomplishment.” —Huffington Post. “Years of experience in drag shows before he took the theater by storm as a writer taught Harvey Fierstein his way around a girdle, and in CASA VALENTINA…he shares the laughs, tears, dangers and rewards of cross-dressing in an illuminating work that is moving, hilarious and ultimately heartbreaking…Bringing the glory and the contradictions of a whispered subculture to the stage with powerful impact, Mr. Fierstein…tackles every point of view, eloquently explaining the psychology of cross-dressing, the luxury of dual personalities, and the need for compassion.” —NY Observer. “Never underestimate Harvey Fierstein’s gift for revealing new worlds within worlds we think we know well…[CASA VALENTINA is] moving, beguiling and, yes, again historically significant without lecturing or threatening…Fierstein wants us to understand the vast spectrum of gender and sexuality. Along the way, bless him, he understands how to entertain.” —NY Newsday.
Apply for Rights
Click here for ePlay