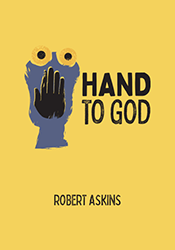 THE STORY: After the death of his father, meek Jason finds an outlet for his anxiety at the Christian Puppet Ministry, in the devoutly religious, relatively quiet small town of Cypress, Texas. Jason’s complicated relationships with the town pastor, the school bully, the girl next door, and—most especially—his mother are thrown into upheaval when Jason’s puppet, Tyrone, takes on a shocking and dangerously irreverent personality all its own. HAND TO GOD explores the startlingly fragile nature of faith, morality, and the ties that bind us.
“The fearsome critter [Tyrone], who takes possession of a troubled teenager’s left arm in Robert Askins’ darkly delightful play really inspires goose bumps as he unleashes a reign of terror…But he’s also flat-out hilarious, spewing forth acid comedy that will turn those goose bumps into guffaws.” —NY Times. “Furiously funny…Askins’ most impressive talent is his ability to make us laugh while juggling those big themes that make life so terrifying: death, depression, alcoholism, sexual guilt, emotional repression, religious hypocrisy and the eternal battle between your good puppet and your bad puppet.” —Variety. “A scabrously funny scenario that steadily darkens into suspense and Grand Guignol horror, this fiery clash of the id, ego and superego is also an audacious commentary on the uses of faith, both to comfort and control us.” —The Hollywood Reporter. “I don’t know which I want to do more: Sing Hallelujah—or wash its dirty little mouth out with soap. …Clearly a singular vision is at work here, with playwright Robert Askins venturing successfully into territory—satire—rich with potholes.” —Deadline. “HAND TO GOD is so ridiculously raunchy, irreverent and funny it’s bound to leave you sore from laughing. Ah, hurts so good.” —NY Daily News.
Apply for Rights
Click here for ePlay