Scenes from a Marriage (Mann) 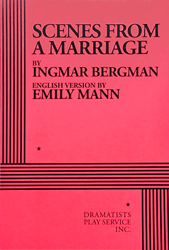 Apply for Rights
FEE: $100 per performance.
THE STORY: In Emily Mann’s highly theatrical adaptation of Ingmar Bergman’s popular 1974 film Scenes from a Marriage, audiences are invited into an intimate stage space to collectively experience the human politics of a relationship, through all the stages of life—from youth to middle age to maturity. Mann’s adaptation illuminates the universal themes of love, identity, and vulnerability that are at the heart of Bergman’s timeless film, exposing how the universal is truly revealed through the specific.
Apply for Rights
Click here for ePlay