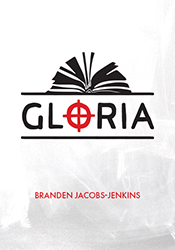 THE STORY: This funny, trenchant, and powerful play follows an ambitious group of editorial assistants at a notorious Manhattan magazine, each of whom hopes for a starry life of letters and a book deal before they turn thirty. But when an ordinary humdrum workday becomes anything but, the stakes for who will get to tell their own story become higher than ever.
Finalist for the 2016 Pulitzer Prize. “[A] whip-smart satire of fear and loathing…GLORIA is to the New York publishing business what David Mamet’s Speed-the-Plow is to the Hollywood film industry.” —NY Times. “All you need to know is that the bitingly funny and fierce GLORIA is one of [2015’s] best shows. What playwright Branden Jacobs-Jenkins says about American society, the media and how we package celebrity and tragedy is as spot-on as it is depressing.” —NY Post. “Sharply observant and playfully theatrical, this thought-provoking work continues its talented young writer’s winning streak. As usual, [Branden Jacobs-Jenkins] handles his serious themes in a thoughtful, provocative manner…the play emerges as a trenchant commentary on the way in which personal tragedies merely serve as grist for the ever-ravenous media machine. A rare example of a contemporary play that keeps us constantly guessing where it’s headed, GLORIA is a work not to be easily forgotten.” — Hollywood Reporter.
Apply for Rights
Click here for ePlay