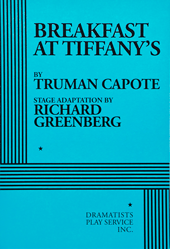 THE STORY: Based on Truman Capote’s classic novella, BREAKFAST AT TIFFANY’S tells the story of a young Southern-born writer, known to us only as Fred, who becomes infatuated with his Upper East Side neighbor: the beguiling, effervescent beauty Miss Holiday Golightly. As Holly pulls Fred into her world of spontaneous parties and luxury, he finds himself increasingly fascinated with this captivating woman.
“Literary, but verging on cinematic, moments [from the novella] must be what inspired the playwright Richard Greenberg to adapt the story for the stage…Greenberg’s version is successful, because it grows out of his love for Capote.” —The New Yorker. “As impossible as it is to separate the movie imprint from our experience of Breakfast at Tiffany’s, Greenberg’s adaptation…deserves credit for going back to the source material. He frames the action in 1957 and has it unfold like a Tennessee Williams memory play, as the narrator’s reminiscences from 1943–44.” —The Hollywood Reporter. “Playwright Richard Greenberg has adapted Truman Capote’s novella Breakfast at Tiffany’s for the theater with remarkable fidelity…Greenberg’s biggest contribution has been to make clearer Capote’s subtle gay subtext in organic ways. The story’s writer-narrator, dubbed Fred by Holly because he reminds her of her adored younger brother, is an authorial stand-in…[with] an endearingly cracked vulnerability and a youthfully needy ambition and ego.” —Backstage.
Apply for Rights
Click here for ePlay