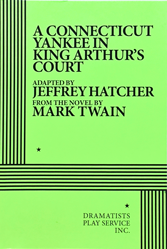 Apply for Rights
FEE: $100 per performance.
THE STORY: Lancelot, Guinevere, and Merlin come tumbling your way in this contemporary adaptation of the satirical tale from America’s favorite humorist. Wander with Twain as he time travels to 6th-century England through the eyes of Hank Morgan of Hartford, Connecticut, who is unexpectedly transported back to the time of legendary King Arthur. Hank astonishes the Middle Age with modern technology and pop culture. These tricks from the future initially advance and improve King Arthur’s Court, but society ultimately struggles to evolve 1,300 years into the future. Jeffrey Hatcher’s adaptation of Twain’s romp exposes the foibles and fortes of both ages, leading audiences to question and laugh at themselves and the principles of the 21st century.
“Playwright Jeffrey Hatcher can hardly open his mouth or lift his pen without dropping a dry witticism or an erudite bon mot.” —TheTangential.com. “Plenty of laughs and a goodly amount of fun…” —TwinCities.com. “Light and smart…[with a] compelling protagonist [who is] out of touch with people and out of his own time, both of which are mined for a great deal of comedy.” —TwinCitiesDailyPlanet.net.
Apply for Rights
Click here for ePlay