The World of Extreme Happiness 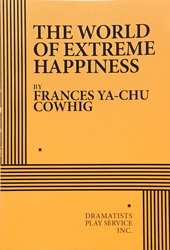 Apply for Rights
FEE: $100 per performance.
THE STORY: Unwanted from the moment she’s born, Sunny is determined to escape her life in rural China and forge a new identity in the city. As naïve as she is ambitious, Sunny views her new job in a grueling factory as a stepping stone to untold opportunities. When fate casts her as a company spokeswoman at a sham PR event, Sunny’s bright outlook starts to unravel in a series of harrowing and darkly comic events, as she begins to question a system enriching itself by destroying its own people.
“Some playwrights have a gift to amuse; Frances Ya-Chu Cowhig has a darker gift. Anyone with romantic notions of Chinese culture will be unsettled by [her] jagged, unsentimental portrait of modern urban China…Cowhig shows us the dysfunctional world as is, in all its stupidity and brutality…Cowhig has written a play to open our eyes, to unsettle.” —Chicago Reader. “…roar[s] with anger…the final three scenes slam into place like heavy doors, turning the funny, brutal show into something red with real fury.” —Time Out (New York). “…fearless, zippily-paced, and satirical, shining a light on Chinese society’s necessary doublethink, be that willful blindness to the political past, or an equally blind belief in an impossibly brilliant future.” —The Independent (London). “The beauty of Cowhig’s play is that it offers a window on a hidden world. The play has an epic scope—charting the effects of the Cultural Revolution, the 1989 crushing of the pro-democracy movement, and the cultural shift that has seen China’s urban population grow by 400 million in the last 30 years—but it tells history through the lives of those looking for a better life.” —The Guardian (UK).
Apply for Rights
Click here for ePlay