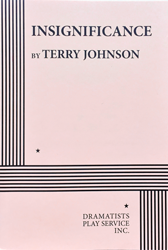 Apply for Rights
FEE: $105 per performance.
THE STORY: Imagine if Marilyn Monroe and Albert Einstein met in a hotel room. Just briefly. Just for one night. What would they talk about? And what if they were interrupted by the “two Joes"—McCarthy and DiMaggio? INSIGNIFICANCE is the intriguing, hilarious, and heartbreaking story of the Senator, the Ballplayer, the Professor, and the Actress. Four icons of American history meeting in one night, in one hotel room, in New York City.
“This modern classic from 1982 memorably blends intellectual stimulation and entertainment…” —The Independent (London). “[INSIGNIFICANCE] transports us to the birth of celebrity culture…The play has a rare quality of timelessness about it…that stems from the way it grasps the nature of acting and the power of theatre. It is thoroughly at ease in its own artifice: we are watching an event that is both unreal and real, people who are both paper-thin impersonations and yet no more flimsy than we are ourselves…Johnson wraps theatre into science, and science into sexy, funny, achingly sad stage poetry with a lightness that borders on profound genius.” —The Telegraph (UK). “Terry Johnson’s richly wrought INSIGNIFICANCE, a cultural collage that both invigorates and entertains, plays brilliant variations on its own scheme of relativity…Johnson’s sure and supple dialogue makes the clashes between these one-person universes achingly human.” —Chicago Reader.
Apply for Rights
Click here for ePlay