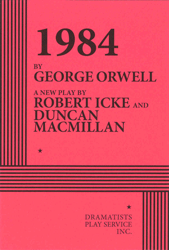 
Not available for nonprofessional production.

THE STORY: Winston Smith, living under the totalitarian rule of the Party, has the idea of writing a diary. It is a crime punishable by death and there is no way of knowing if he is being watched. He imagines two futures—in one, a future readership in a free society thinks of him as a hero; in the other, he is caught, executed, and forgotten. Perhaps both things are true. That day, during the obligatory “Two Minutes Hate,” he wonders who else might be harboring thoughts of rebellion, and who may be working for the Thought Police. Winston starts the diary. He writes the year, so far as he knows it: 1984. This multi-award winning adaptation of George Orwell’s ultimate dystopian novel continues to resonate throughout the world.
“This is a staging that reconsiders a classic with such steely power that it chills brain, blood and bone.” —The Times (London). “…pitilessly brilliant…a superbly handled multimedia speculation on the nature of truth that never lets the audience off the hook.” —Guardian (UK). “…complex, harrowing and ingenious…” —The Daily Telegraph (UK). “…a work of extraordinary quality and intensity…a very neat theatrical telling of the classic dystopian parable which is more a study of internal tension and tiny acts of defiance as it is a political drama.” —The Independent (London). “Icke and Macmillan’s adaptation of 1984 stands out as one of the most unique and disturbing takes on a book that sadly never seems to lose its relevance.” —The Hollywood Reporter. “…fresh, tight, and horrifying…a deadly chilling piece for dangerous times.” —Time Out London.
Apply for Rights