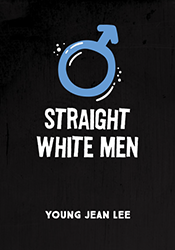 THE STORY: When Ed and his three adult sons come together to celebrate Christmas, they enjoy cheerful trash-talking, pranks, and takeout Chinese. Then they confront a problem that even being a happy family can’t solve: When identity matters, and privilege is problematic, what is the value of being a straight white man?
“The signal surprise of STRAIGHT WHITE MEN, written by the ever-audacious Young Jean Lee, is that the play is not a full-frontal assault on the beings of the title…Ms. Lee’s fascinating play goes far beyond cheap satire, ultimately becoming a compassionate and stimulating exploration of one man’s existential crisis. Believe it or not, Ms. Lee wants us to sympathize with the inexpressible anguish of her protagonist, a middle-aged, upper-middle-class straight white man…[A] mournful and inquisitive play…” —NY Times. “A prime example of dramaturgical normcore—that is, experimental plays dressing up like fourth-wall family dramas—[STRAIGHT WHITE MEN] tickles your soft aesthetic underbelly, before easing in the knife of reality…If Lee wants to dissect the conscience of our society’s most visible and powerful population, what better mode than living-room realism, sadly, our default theatrical setting? …However, if you expect deconstruction-prone Lee to break down this form through surreal flourishes or screwing with the frame, you may be surprised. Most shocking is the absence of shock. She’s too good a writer for the drama not to work on its own terms, and as such, the result is both emotionally satisfying…and unflinching in its critique of white-driven social justice.” —Time Out (New York). “To cut to the obvious, STRAIGHT WHITE MEN is a loaded title…But the play turns out to have a disarming gentleness to it. Lee has more sympathy for her subject than scorn…STRAIGHT WHITE MEN is a family drama that on the surface looks fairly standard, but the play transcends psychological realism. Lee is wrestling with the meaning of straight white male privilege through characters who are self-conscious beneficiaries of an identity increasingly out of favor in 21st century America yet still, like it or not, in control.” —LA Times.
Apply for Rights
Click here for ePlay