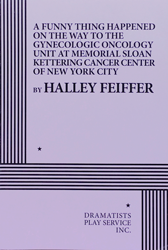 Apply for Rights
FEE: $100 per performance.
THE STORY: A foul-mouthed twenty-something comedian and a middle-aged man embroiled in a nasty divorce are brought together unexpectedly when their cancer-stricken mothers become roommates in the hospital. Together, this unlikely duo must negotiate some of life’s biggest challenges…while making some of the world’s most inappropriate jokes. Can these two very lost people learn to laugh through their pain and lean on each other, when all they really want to do is run away?
“…a play that is as deeply felt as its name is long…[an] exposed nerve of a script…” —NY Times. “…raunchy and fearless…[an] audacious mix of crude humor and deep feeling…funny and moving…[Feiffer’s] distinct voice is on fine display throughout, in all its uniquely unsettling glory. A FUNNY THING…manages to take the least funny thing possible and uncover dark laughter along the way.” —TheaterMania.com.
Apply for Rights
Click here for ePlay