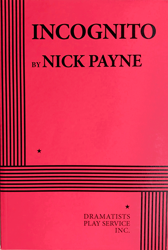 Apply for Rights
FEE: $100 per performance.
THE STORY: Four actors play a combined 21 characters within INCOGNITO’s three interwoven stories. A pathologist steals the brain of Albert Einstein; a neuropsychologist embarks on her first romance with another woman; a seizure patient forgets everything but how much he loves his girlfriend. INCOGNITO braids these mysterious stories into one breathtaking whole that asks whether memory and identity are nothing but illusions.
“…tantalizing…[a] lively, self-examining drama of ideas…Mr. Payne makes it clear that science and sentimentality need not be mutually exclusive…as befits a work about the vagaries of memory, Mr. Payne’s multilayered works remain in your mind, challenging our most fundamental notions of autonomous selfhood.” —NY Times. “[INCOGNITO] is likely to send you out of the theatre working out the puzzle. And keep you thinking for days after…highly recommended, thought-provoking, impressive and entertaining.” —The Huffington Post. “…at the top of its class…clever and poignant…one of [Payne’s] great gifts is the ability to poignantly meld complicated philosophic and scientific tenets with simpler human struggles.” —The Guardian (US). “[INCOGNITO] further confirms that Payne is in a class of his own as a contemporary writer…an examination of the brain through the lens of personal identity…Payne’s writing style…allows for such heady concepts to spring naturally from everyday conversations. In fact, INCOGNITO never once feels like a stolid post-grad lecture on neuroscience. Through and through, it is a compelling, humane story, featuring absorbing characters with whom we feel a kinship.” —TheaterMania.com.
Apply for Rights
Click here for ePlay