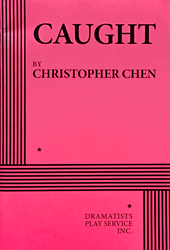 Apply for Rights
FEE: $100 per performance.
THE STORY: An art gallery hosts a retrospective of the work of a legendary Chinese dissident artist who was imprisoned in a Chinese detention center for a single work of art. Recently profiled in the New Yorker, the artist himself is present, and shares with patrons the details of an ordeal that defies belief. A labyrinthine exploration of truth, art, social justice, and cultural appropriation, where nothing is as it first appears.
“…[an] intricately constructed, unrelentingly destabilizing puzzle of a play about the anatomy of truth and the provocative power of illusion…” —The New York Times. “…boundary-pushing…Chen gleefully pokes fun at the myriad fallacies that presently reign over American art and media: the sanctity of identity, the disdain for ‘appropriation,’ and the belief that journalists can and should report a perfectly objective truth.” —TheaterMania.com. “…one of the smartest, most cynical, heart-wrenching, brain-teasing comedies I’ve seen in a long while…The only truth this play has to offer is that truth is unknowable…a clever, highly theatrical comedy, a spectacular con.” —The Philadelphia Inquirer
Apply for Rights
Click here for ePlay