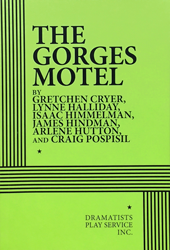 THE STORIES: Lives intersect in comic and dramatic fashion in a motel that has seen better days in Watkins Glen, New York. Break-ups and a wedding, a rapping reverend and a drone attack, the ridiculous and the sublime all come together in one unlikely place. THE GORGES MOTEL is comprised of the short plays MISSING by James Hindman, KISSING COUSINS by Craig Pospisil, WHAT LOLA SAW by Isaac Himmelman, REVEREND and SECOND CHANCE by Lynne Halliday, BRECKENRIDGE by Gretchen Cryer, and HERE COMES THE DRONE by Arlene Hutton.
“THE GORGES MOTEL [is] a tantalizing, comic daisy chain of short plays by six playwrights.” —NY Times. “[THE GORGES MOTEL] has the feel of somehow being ‘woven together’ without the scenes necessarily depending upon one another. The parts work as well separately as they do in concert…Standing out are Craig Pospisil’s KISSING COUSINS and Gretchen Cryer’s BRECKENRIDGE…Ms. Cryer’s script…is rich in tropes and authentic characterization.” —Off Off Broadway Review. “Arlene Hutton’s HERE COMES THE DRONE ties the anthology’s strands together and tops them with a great sight-gag bow…” —Time Out (New York). “MISSING by James Hindman is in three parts…[The first] focuses on Virginia the proprietor of the motel and one of the guests, Robert. Virginia assumes Robert is in town to visit the 400-foot-deep gorge in Watkins Glen State Park. But Robert, a hometown boy, is actually returning to climb out of a deeper, albeit metaphorical hole, one left by his estrangement from his family. The second is his meeting with his sister, the most affecting scene in the play. Lynne Halliday expands on Virginia’s story in SECOND CHANCE, in which she too is estranged from her family…The funniest piece is KISSING COUSINS by Craig Pospisil, in which two sisters discover that they both slept with the groom—one 15 years ago, one last week…The most extensive and surreal piece, by Arlene Hutton, starts with the bride sitting in shock, her wedding dress covered in blood.” —New York Theater.
Apply for Rights
Click here for ePlay