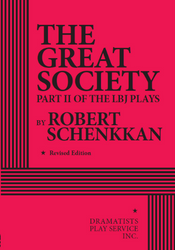 Apply for Rights
FEE: $105 per performance. SPECIAL NOTE ON MUSIC: The song "Happy Days Are Here Again" is optional for production; an additional fee of $10.00 per nonprofessional performance for the use of the song will be added.
THE STORY: The minute you gain power, you start to lose it. In his second term of office, LBJ struggles to fight a war on poverty as the war in Vietnam spins out of control. Besieged by opponents, Johnson marshals all his political wiles to try to pass some of the most important social programs in U.S. history. THE GREAT SOCIETY depicts the larger-than-life politician’s tragic fall from grace, as his accomplishments—the passage of hundreds of bills to enact reform in civil and voting rights, poverty, and education—are overshadowed by the bitter failure of the Vietnam War. THE GREAT SOCIETY is complemented by its companion piece, the Tony Award winning All the Way, depicting LBJ’s first term in office.
“As THE GREAT SOCIETY churns through the four years of Johnson’s troubled full term as president, Mr. Schenkkan doesn’t need to draw any diagrams to make us feel how relevant the issues it explores remain…it’s impressive in its scope, surprisingly energetic and shines a bright, clear light on a pivotal moment in American history…” —NY Times. “…Schenkkan’s propulsive intertwining of historical cause and effect is masterly…Implicit parallels are drawn between the wars in Vietnam and Iraq, the polarity in Congress then and now, the state of civil rights in the ’60s and today. And it’s hard not to leave the theater asking, what progress have we really made?…Few recent American dramas bite off as much as Schenkkan’s LBJ plays do, or make you think as hard. And few are as enlightening, and disturbing.” —The Seattle Times. “Rich, complex and dramatic…THE GREAT SOCIETY is both triumphant and tragic, an insightful look at history and the morality of power.” —The Daily Courier (Grants Pass, OR).
Apply for Rights
Click here for ePlay