The League of Youth 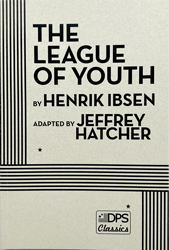 Apply for Rights
FEE: $100 per performance.
Adapted from the play by Henrik Ibsen.

THE STORY: In an adaptation full of sparkling wit and cynical humor, this political comedy follows the meteoric rise of ambitious young Stensgaard, an office-seeker who’s willing to say anything to win an election. Forming the “League of Youth” to lobby against his opposition, Stensgaard schemes, romances, and manipulates in his rush to power. Ibsen’s most popular play in his lifetime, THE LEAGUE OF YOUTH caused fighting in the streets, with conservatives claiming it was an attack on their party and liberals claiming it was an attack on theirs! A thought-provoking comedy that’s sure to feel shockingly familiar.
“[THE LEAGUE OF YOUTH] could just as well have been written this year, rather than 150 years ago…While entertaining, Ibsen’s tale is also disheartening in its timeless and universal nature…there’s fun all around in this fast-moving show—a show that will blow away many of your pre-conceived notions about Ibsen.” —507 Magazine (Rochester, NY).
Apply for Rights
Click here for ePlay