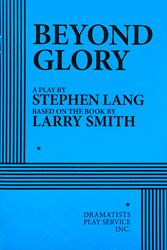 Apply for Rights
FEE: $100 per performance.
THE STORY: In Stephen Lang’s theatrical adaptation of Larry Smith’s book Beyond Glory: Medal of Honor Heroes in Their Own Words, Lang presents the stories of eight veterans from World War II, Korea, and Vietnam, rendering firsthand accounts of the actions which resulted in each of them receiving the nation’s highest military award, the Medal of Honor. BEYOND GLORY gathers these men together in the present to look back on the defining moments of their lives and to examine the meaning of courage, duty, and, ultimately, humility.
“…[BEYOND GLORY] provides a powerful reminder of the hardships, psychic stresses and physical dangers that men and women endure on the front lines…Its sobriety, simplicity and lack of histrionics are the show’s signal strengths…BEYOND GLORY is really beyond reproach in its no-frills treatment to the material…quietly celebratory…” —NY Times. “…an uplifting play…[BEYOND GLORY] invite[s] audiences to celebrate average people doing extraordinary things and remind[s] us that the horrors of war also create moments of heroism…[a] portrait of valor that doesn’t turn war into a blue state-red state debate.” —Variety. “[Lang’s] adaptation of Larry Smith’s book is sincere, respectful, and completely anomalous in a milieu that hasn’t exhausted itself celebrating American soldiers…All the more reason to be glad it’s here.” —NY Magazine.
Apply for Rights
Click here for ePlay