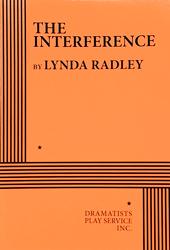 Apply for Rights
FEE: $105 per performance.
THE STORY: “Allegations. Drunk? He said. She said. Truth.” In a culture of amplified voices and distorted information where student athletes become celebrities, everyone has incentive to bury truth. When a survivor speaks up, can her truth rise above the noise? THE INTERFERENCE is a story for a world in the midst of a tectonic cultural shift that shakes the old patriarchal society to its core.
“Lynda Radley’s script manages to distill a tragically familiar yet original story…a compelling narrative of broken snippets of conversation…[THE INTERFERENCE] capture[s] the essence of the moment in all its rage, its despair and hope. It’s a story that needs to be told.” —BritishTheatreGuide.info. “…an intelligent, heartfelt show…” —Guardian (UK). “Radley’s text is formidable…both in its powerful narrative structure, and in its ear for the chilling parallels between the brutal, aggressive language of the sports field, and the frightening attitudes to women that often go along with it…brisk, gripping, fiercely intelligent, and tightly focused…” —The Scotsman (Edinburgh). “…a damning indictment of a warped establishment protecting its own by any means necessary.” —The Herald (Scotland). “…serious, impactful drama…tight, poised and hard hitting…Radley’s intelligent dialogue shows the striking similarity between the lexicons of sport and rape culture…Radley’s writing exhibits a dark humour…there is an astonishing subtlety to the language of the play…[THE INTERFERENCE] adeptly addresses a difficult topic with a grace and thoughtfulness which is exceptional.”—EdFringeReview.com. “…engrossing…[a] perceptive and compelling piece…” —The List.
Apply for Rights
Click here for ePlay