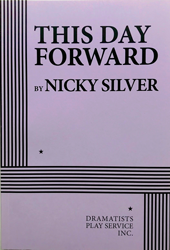 Apply for Rights
FEE: $100 per performance.
THE STORY: Martin has just married the girl of his dreams. Only moments after their vows, however, Irene reveals that she, in fact, is deeply in love with someone else, a gas station attendant named Emil. To make matters worse, she called Emil during the reception and he’s on his way to confront the groom. By the end of Act I, Irene has left Martin to be with her love. Act II is set forty-six years later. Noah, Irene’s son, is waiting for his mother to be delivered by the police, having been found disoriented at the airport. We learn from Noah that Martin and Irene did, in fact, end up together. The mystery of how that happened is slowly revealed as Noah grapples with his combative and confused mother, his desperate sister, and Leo, the young man Noah pushes away despite the love between them.
Apply for Rights
Click here for ePlay