The Yalta Game; The Bear; Afterplay 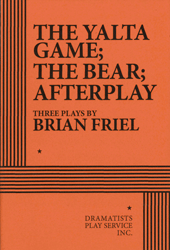 THE STORIES: THE YALTA GAME. Developed from a theme in Chekhov’s 1899 story “The Lady with the Dog.” Two strangers meet on holiday and almost manage to convince one another that disappointments are “merely the postponement of the complete happiness to come…” (1 man, 1 woman.) THE BEAR. Elena Popova, a young and attractive widow, has immersed herself in the role of mourning for her philandering but now dead husband. Luka, her frail and ancient manservant, tries in vain to snap her out of it. Then Gregory Smirnov barges in… (2 men, 1 woman.) AFTERPLAY. 1920s Moscow, a small, run-down café. Uncle Vanya’s niece, Sonya Serebriakova, now in her forties, is the only customer. Until the arrival of the Three Sisters’ put-upon brother Andrey Prozorov. (1 man, 1 woman.)
“[THE YALTA GAME] captures the egotism of love and the lack of fulfilment and self-knowledge that can lie even at the heart of sexual passion…” —The Daily Telegraph (UK). “Friel’s [THE BEAR] is superbly funny, vivid, keenly alert to Chekhov’s modern sensitivities to gender issues…” —Financial Times (UK). “Brian Friel’s audacious, Chekhovian epilogue [AFTERPLAY] is short, masterful and hilarious…prior knowledge of Chekhov is neither assumed nor required…Friel inhabits the characters so masterfully you are ultimately less preoccupied with the backstory than increasingly fearful for their future.” —Guardian (UK).
Apply for Rights
Click here for ePlay