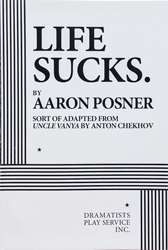 Apply for Rights
FEE: $120 per performance.
THE STORY: In this brash reworking of Chekhov’s Uncle Vanya, a group of old friends, ex-lovers, estranged in-laws, and lifelong enemies gather to grapple with life’s thorniest questions—and each other. What could possibly go wrong? Incurably lustful and lonely, hapless and hopeful, these seven souls collide and stumble their way towards a new understanding that LIFE SUCKS! Or does it?
“[LIFE SUCKS.] is altogether wise, profoundly humane, hilarious, quirky, endearing and, in countless clever ways, brilliantly faithful to its source…Posner has managed to find his own voice in the process, bringing a playful, far from cynical, fourth-wall-piercing originality to the story…” —Chicago Sun-Times. “…adrenaline-fueled, hyper-aware…[Posner] sticks lovingly close to Chekhov’s plot…[He] gives huge and equal bearhugs to Chekhov’s absurd comedy and touching pathos while leaving room to banter with the audience…sassy yet heartfelt…” —The Washington Post. “…very smart and self-aware…a light and airy conversation-starter of a show that’s just satirical enough to fulfill those who’d rather sit in traffic than watch anything by Chekhov and clever and accurately Chekhovian enough to pleasure those who love the source play…hugely enjoyable…” —Chicago Tribune. “…[a] delightful Chekhov riff…The play defies traditional categories like ‘comedy’ or ‘drama,’ so let’s just settle for calling it ‘fantastic.’” —Time Out Chicago. “Comic gold…Filled with laughs and anarchic asides…Posner’s ear for comedy is reminiscent of Mel Brooks in his prime.” —BroadwayWorld.com. “Life sucks, maybe, but watching the Posner play is pure bliss.” —DCTheatreScene.com.
Apply for Rights
Click here for ePlay