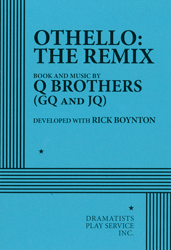 Apply for Rights
FEE: $100 per performance. SPECIAL NOTE: Packaged rental materials including CDs are required for production. The cost is a flat fee of $100.00 per production and a $100.00 refundable deposit, plus shipping and handling.
developed with Rick Boynton

THE STORY: Othello is spun out and lyrically rewritten over original beats in this high-energy spin on Shakespeare’s play, proving that the Bard himself was the original master of rhythm and rhyme.
“While [the Q Brothers’] version conforms broadly to the original, it is continually infused with impish humor; it’s as much a spoof of Othello as it is a serious attempt to translate the play into a contemporary musical idiom…The music…pulses with life, and the cascading rhymes of the lyrics are often inspired…it’s a tickling refreshment to leave a production of this dark tale with a smile on your face, or an urge to head to the nearest nightclub.” —NY Times. “Who knew Othello could be so funny? The Q Brothers have transformed the bloody tragedy into a rip-roaring, rapped one-act rich with dizzying rhymes…clever and exhilarating…” —Time Out (New York). “…full of clever updates and snarky rhymes…[OTHELLO: THE REMIX] is never less than inventive and even instructive in finding cognates for Shakespeare’s poetry. His heroic metaphors drawn from now-obscure knowledge seem reinvigorated when translated into terms as familiar to us as heraldry and the hunt were to Elizabethans.” —NY Magazine.
Apply for Rights
Click here for ePlay
Packaged Materials