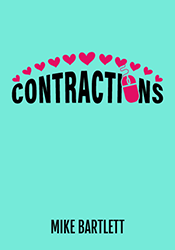 THE STORY: Emma’s been seeing Darren. She thinks she’s in love. Her boss thinks she’s in breach of contract. In a series of cordial but increasingly tense conversations, the two dissect the differences between “sexual” and “romantic,” negotiate the nature of Emma’s interoffice relationship, and face the consequences of shrinking privacy and binding contracts.
“…horribly plausible… a prophetic metaphor for the climate of fear in which large companies increasingly hold their employees to ransom… a short, sharp shocker…” —The Guardian (UK)

“[CONTRACTIONS] speaks with brutally entertaining, bullet-point directness to the slaving, anxiety-ridden middle-classes… [Bartlett] displays here an extraordinary gift for satire. …this two-hander is often ferociously funny while being absolutely appalling—pulling off the rare trick of being at once far-fetched and grimly plausible. …Bartlett rustles up one humiliation after another—achieving an Orwellian finesse in his depiction of absolute power and pulling off a savage twist that recalls Swift’s A Modest Proposal.” —The Daily Telegraph (UK)

“…[CONTRACTIONS] will chill to the marrow anyone who’s ever had to fill out a W-2. …the piece’s offbeat rhythms leave you pleasingly uncertain about where the narrative is headed… CONTRACTIONS is The Office with a swerve toward the Gothic, a play leading you to the conclusion that in every workplace compact, the devil really is in the details.” —The Washington Post
Apply for Rights
Click here for ePlay