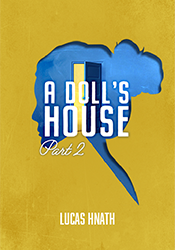 THE STORY: In the final scene of Ibsen’s 1879 groundbreaking masterwork, Nora Helmer makes the shocking decision to leave her husband and children, and begin a life on her own. This climactic event—when Nora slams the door on everything in her life—instantly propelled world drama into the modern age. In A DOLL’S HOUSE, PART 2, many years have passed since Nora’s exit. Now, there’s a knock on that same door. Nora has returned. But why? And what will it mean for those she left behind?
“[A] smart, funny and utterly engrossing play…Hnath approaches what might seem like a hubristic project with the humility and avidity of an engaged Everyreader. A DOLL’S HOUSE, PART 2 gives vibrant theatrical life to the conversations that many of us had after first reading or seeing its prototype…” —NY Times. “…lucid and absorbing…Modern in its language, mordant in its humor and suspenseful in its plotting…the play judiciously balances conflicting ideas about freedom, love and responsibility.” —Time Out NY. “Hnath’s inspired writing, which endows each character with an arsenal of fastballs, curveballs and spitballs, keep[s] us disarmingly off-balance. He’s an uncommonly gifted parodist. For all its seriousness, A DOLL’S HOUSE, PART 2 is suffused with a contagious bemusement.” —Deadline.com. “[A DOLL’S HOUSE, PART 2] delivers explosive laughs while also posing thoughtful questions about marriage, gender inequality and human rights…as much an ingenious elaboration and deconstruction of A Doll’s House as a sequel, and it stands perfectly well on its own…With unfussy eloquence, [the play] asks how much, in a century-plus, life has changed for Nora and women like her in a world that often still has firm ideas about where they belong.” —Hollywood Reporter.
Apply for Rights
Click here for ePlay