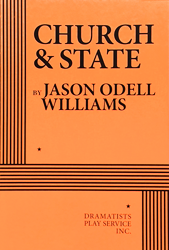 THE STORY: Three days before his bid for reelection, in the wake of a school shooting in his hometown of Raleigh, North Carolina, a Republican U.S. senator makes an off-the-cuff comment to a blogger that gets leaked on “the Twitter,” calling into question the senator’s stance on guns and God. As his devoutly Christian wife and liberal Jewish campaign manager try to contain the damage, this look at how religion influences politics and how politics has become a religion is simultaneously funny, heartbreaking, and uplifting.
“[CHURCH & STATE] is surprisingly subtle and gripping entertainment…a sophisticated dialectic that presents both sides of the gun debate…Williams avoids demonizing his conservative Southerners, who are winning, strikingly intelligent, and above all, sincere in their beliefs.” —LA Times. “A crackling script. Feels very of the moment. An enjoyable, thought-provoking and, I promise, humorous piece of theatre. I wish every member of Congress would see it!” —NPR. “This is a powerful, often humorous, and highly contemporary piece…The play has several surprises, four fascinating characters, and so many lines that resonate.” —Huffington Post. “[Williams] presents his argument so entertainingly, few would object to going along for the ride…Williams is adept at jacking up the tension, and he leavens potentially leaden debates with plenty of humor…[Williams’] words…need to be said and heard.” —Time Out NY.
Apply for Rights
Click here for ePlay