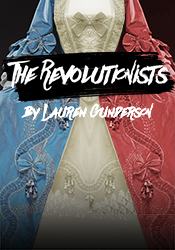 MIN. PERFORMANCE FEE: $130 per performance. SPECIAL NOTE: Music for “Our Song” is required for production of THE REVOLUTIONISTS. There is no royalty fee for the use of this music.

THE STORY: Four beautiful, badass women lose their heads in this irreverent, girl-powered comedy set during the French Revolution’s Reign of Terror. Playwright Olympe de Gouges, assassin Charlotte Corday, former queen (and fan of ribbons) Marie Antoinette, and Haitian rebel Marianne Angelle hang out, murder Marat, and try to beat back the extremist insanity in 1793 Paris. This grand and dream-tweaked comedy is about violence and legacy, art and activism, feminism and terrorism, compatriots and chosen sisters, and how we actually go about changing the world. It’s a true story. Or total fiction. Or a play about a play. Or a raucous resurrection…that ends in a song and a scaffold.
“…a sassy, hold-on-to-your-seats theatrical adventure…[Gunderson] has created a play that is wonderfully wild and raucous…It’s a wild ride, filled with verbal gymnastics that come racing at you so quickly it’s occasionally hard to keep up. Listen closely, though, and hang on tight. If you do, you’ll be treated to an invigorating and enlightening journey.” —Cincinnati Enquirer. “It’s simply a brilliant script…” —CityBeat (Cincinnati). “…in this sparkling work, politics is very, very funny. [Gunderson] knows it’s tricky to present entertaining, yet socially driven art, but she does so without losing the rhythm and forward momentum of her characters…These are hilarious and lovable women trapped in a history with a somber final act.” —Houston Chronicle. “…an astoundingly accomplished show…a cause for rejoice…Ingeniously conceived and delivered.” —Atlanta Journal-Constitution. “THE REVOLUTIONISTS resembles a blindingly scintillating gem-like puzzle…By turns it is drolly funny and affectingly poignant, then doubles back to satirical farce, then ends by bringing into stark relief the social commentary that it has been nurturing all night.” —FloridaTheaterOnStage.com.
Apply for Rights
Click here for ePlay