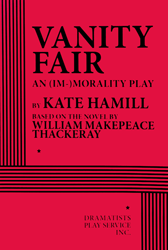 Apply for Rights
FEE: $100 per performance.
based on the novel by William Makepeace Thackeray

THE STORY: Becky is “bad.” Amelia is “good.” But in an unfair world, it isn’t always that simple…Two women—one born into privilege, another straight from the streets—attempt to navigate a society that punishes them for every misstep. Clever Becky’s not afraid to break the rules; soft-hearted Amelia’s scared to bend them. Both strive for what they want—but neither can thrive without the other. Through Becky and Amelia’s victories and losses, this thrilling, highly theatrical (im)morality play explores how flexible our morals can become when the wheel of fortune turns…Bold, wickedly funny, and shockingly relevant, VANITY FAIR demands that we face our own hypocrisy. After all…who are we to judge?
“[VANITY FAIR] is a gift to actors and a goody bag for its audience. …This play provides a rare thing—a female character who behaves just as badly as the male ones without being reformed or punished.” —NY Times. “…coruscatingly brilliant… Hamill’s VANITY FAIR…[is] a masterpiece of creative compression that is at once arrestingly original and faithful to its source material… [it’s] a dead-serious romp whose implicit feminism has been given a sharper point by Hamill…” —Wall Street Journal. “…above all it’s the canny script of Hamill that shines. She captures the sweep of the novel and its many ideas with spot-on choices.” —Huffington Post. “…scandalous, relentless and heartbreaking…bound to impress even the most loyal of Thackeray fans. …one of the most intriguing adaptations of a novel I have ever seen… the plot is saturated with such vigor and life. …[VANITY FAIR] brings the essence of the novel in all its glory to the stage.” —BroadwayWorld.com.
Apply for Rights
Click here for ePlay