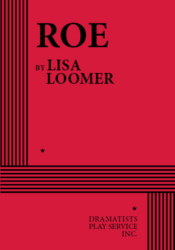 Apply for Rights
FEE: $105 per performance.
THE STORY: Roe v. Wade, the landmark 1973 case that legalized abortion, is still fiercely debated over forty years later. In this incisive play, acclaimed writer Lisa Loomer cuts through the headlines and rhetoric to reveal the divergent personal journeys of lawyer Sarah Weddington and plaintiff Norma McCorvey ("Jane Roe") in the years following the fateful decision. In turns shocking, humorous, and poignant, ROE reflects the polarization in America today while illuminating the heart and passion each side has for its cause.
“This is a big play with big ideas…a rousing entertainment…ROE is not a screed for or against abortion…Rather, Loomer’s main theme is the process by which everyday people get swept up in the big currents of history, often with a random dose of chance…Loomer finds the humanity in all her characters. In the end, she seems to suggest that, polarized as we are, if we’d open our hearts and minds a bit, maybe we could find a little compassion for each other.” —Mail Tribune (Medford, OR). “…robust and topical…Get ready for a big, bruising play of the conflicting ideas and emotions roiling at the center of the abortion debate. This is a lively and intelligent look at one of the most divisive issues of our time.” —Mercury News (San Jose, CA). “[ROE is] a useful primer—embroidered by the emotional, religious and political motivations of its adherents and opponents—on one of the most durably contentious subjects of our time. With abundant care, the playwright refracts the complexity of abortion rights through the personal prisms of two emblematic real-life characters…[an] admirably probing play…” —Washington Post.
Apply for Rights
Click here for ePlay