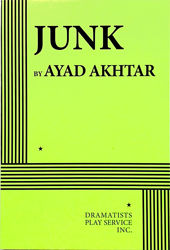 Apply for Rights
FEE: $100 per performance.
THE STORY: It’s 1985. Robert Merkin, the resident genius of the upstart investment firm Sacker-Lowell, has just landed on the cover of Time magazine. Hailed as “America’s Alchemist,” his proclamation that “debt is an asset” has propelled him to dizzying heights. Zealously promoting his belief in the near-sacred infallibility of markets, he is trying to reshape the world. What Merkin sets in motion is nothing less than a financial civil war, pitting magnates against workers, lawyers against journalists, and ultimately, pitting everyone against themselves.
“JUNK follows a labyrinthine, economically dense plot with remarkable briskness, efficiency and accessibility…The script is refreshingly nonjudgmental.” —NY Times. “JUNK melds a breadth of genres—crime story, tragedy, issue play, cautionary tale—into a fast-moving, broad-ranging social thriller…In Akhtar’s telling, this story is partly about male status and power…But it’s also about race, privilege, competing ideals and, of course, greed.” —Time Out (New York). “Akhtar once again proves his talent for illuminating the forces running our world, forces that would prefer to remain in the dark.” —TheaterMania.com. “…smashingly entertaining…This big, brash melodrama is spiked…with acid humor, and it’s propelled by barely contained outrage…That Akhtar manages to make all of this financial wrangling both lucid and exciting is impressive. That he finds so much contemporary resonance in the material…is downright thrilling.” —Star-Ledger (NJ). “…[a] remarkable achievement. JUNK may have no heroes, but it is searingly human…JUNK unfolds with the mounting tension of a Shakespearean tragedy.” —Deadline.com.
Apply for Rights
Click here for ePlay