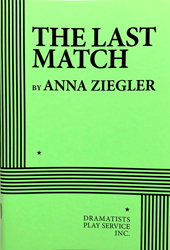 Apply for Rights
FEE: $100 per performance.
THE STORY: Played out under the bright lights of the US Open semifinals, THE LAST MATCH pits rising Russian star Sergei Sergeyev against American great Tim Porter in an epic showdown that follows two tennis titans through pivotal moments in their lives both on and off the court. This gripping, fast-paced story captures the intense world of competitive sports, and human rivalry, and what it means to want something—and the lengths we will go to in order to feel relevant, important, and young.
“Ziegler [is] a fertile writer of admirably varied style and subject…Ziegler is also…a master of swelling choral dialogue, in which urgent but lyrical phrases are intoned in a counterpoint that seems to echo down the halls of history…The routine back-and-forth of a hard-fought match…approaches the ineffable radiance of one of those moments that tennis fans live for. Time seems to stop in such moments, even as it extends into eternity.” —NY Times. “A tennis match with no net, no balls, and no rackets proves…gripping in Anna Ziegler’s play…[Ziegler] manages to dramatize a very realistic and quite exciting tennis match between perfectly matched players…Like those invisible balls, the dialogue whizzes by at warp speed.” —Variety. “A play with plenty of underspin, Anna Ziegler’s gripping and contemplative drama…is a nail-biter, even as Ziegler pauses to eavesdrop on the men’s thoughts, memories, and interactions with the women in the stands.” —The New Yorker.
Apply for Rights
Click here for ePlay