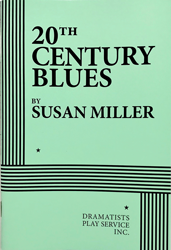 FEE: $105 per performance. SPECIAL NOTE ON IMAGES: Projected Images are required for production. There is a $10 cost to purchase electronic copies of the images. Please contact our customer service department to make payment, and the images will then be distributed digitally. There is a $5 per performance nonprofessional fee for the use of the image by Beowulf Boritt. This cost will be added automatically to the licensing fees, upon written approval of a production application. There is no additional fee for the use of the photographs by Jane Krensky.

THE STORY: Four women meet once a year for a ritual photo shoot, chronicling their changing (and aging) selves as they navigate love, careers, children, and the complications of history. But when these private photographs threaten to go public, relationships are tested, forcing the women to confront who they are and how they’ll deal with whatever lies ahead. 20TH CENTURY BLUES is a sharply funny and evocative play by Obie Award and Susan Smith Blackburn Prize-winner Susan Miller that questions our place in the world and with one another.
“Though it touches on themes of friendship and art-making, this is mostly a comedy about aging. Ms. Miller…hopes to demonstrate that when women turn 60 they don’t suddenly become sexless, charmless, invisible.” —NY Times. “A brilliant…play… Miller’s script is clever and wise, bursting with great lines and naked truths.” —Curve Magazine. “20TH CENTURY BLUES…breaks the mold when it comes to the female ensemble dramedy…With poignant but still laugh-out-loud social commentary on the process of aging in America, razor sharp one-liners and thought-provoking questions about older generations adjusting to the younger world, 20TH CENTURY BLUES takes a tried and true comedic premise and adds a uniquely modern twist.” —BroadwayWorld.com. “[The] deceptive comic tone of…20TH CENTURY BLUES draws us into raw, painful, poignant confrontation among four friends.” —Joyce Carol Oates. “Critics’ Pick! Susan Miller’s 20TH CENTURY BLUES is empathetic and timely.” —Deadline.com. “These are fully rounded people. Representative of a lot of women who want to see themselves on stage. It’s a diverse play as well.” —PBS Theater Talk.
Apply for Rights
Click here for ePlay