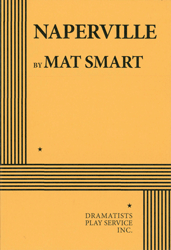 Apply for Rights
FEE: $100 per performance.
THE STORY: Howard leaves his career in Seattle and moves back home to Naperville, Illinois, to help his mother Candice transition after an accident leaves her blind. At the local Caribou Coffee, they cross paths with Anne, Howard’s old classmate and an expert on Naperville’s founder, Captain Joseph Naper. NAPERVILLE is a comedy about high school crushes, curfews (for your mother), sight, and how beauty reveals itself in the suburbs.
“Smart…surprises you in this intricate, delightful comic drama…everyone in this shop has a story, a loss, a regret, and Smart weaves their tales together adeptly.” —The New York Times. “…charming…Smart’s play is a loving appreciation of an underappreciated place to call home.” —Time Out Chicago. “…a quirky, deeply poetic homage to [an] affluent western suburb…[a] piercingly honest and humane portrait of ordinary people…it is bound to leave you breathless.” —Chicago Sun-Times. “Smart’s clever, touching, and hilarious…play NAPERVILLE is universal whether you grew up in a subdivision, farm, or high rise…” —Theasy.com. “NAPERVILLE is a charming and rich examination of a group of suburbanites looking for redemption from [an] underlying sense of malaise…NAPERVILLE is filled with magnetizing moments and engaging characters that play on the comedy and tragedy of quiet places we are too quick to forget. [Smart’s] dramedy is a beautiful valentine to the heart and soul of the American suburbs.” —NewYorkTheatreReview.com.
Apply for Rights
Click here for ePlay