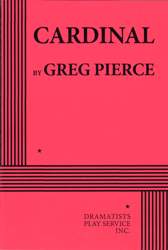 THE STORY: Paint it red. So begins Lydia’s wild idea to invigorate her Rust Belt town. But when a whip-smart entrepreneur co-opts her scheme, a precarious rivalry is born. A battle for the town’s soul ensues, causing its obsessive mayor, its defiant matriarch, and the rest of its residents to question who they are and where they’re headed.
“…whimsical…[Pierce] is not just satirizing small town America, with its hopeless reinvention schemes and hapless part-time politicians. He’s after something larger about the unintended consequences of capitalism on both individuals and societies: meant to be a cure-all, it is too often a comeuppance.” —NY Times. “CARDINAL, Greg Pierce’s…take on urban decay and gentrification, offers a breezy but no less pointed version of the tragedy and melodrama in plays like Bruce Norris’ Clybourne Park and Lynn Nottage’s Sweat…[It] also offers…juicy roles in the push-me, pull-you vein of romantic comedies like Northern Exposure. A dark vein of cynicism churns Pierce’s blood, however…For most of the evening, it’s tough love with a cackle.” —Deadline.com.
Apply for Rights
Click here for ePlay